The amount of talent that stood on the field on the first day of practice dictated the expectations that the Fayetteville-Manlius varsity football team has of themselves.

Head coach Paul Muench said it best when he explained how different this year’s team is than last year’s and said, “every year, the offense is tailored around who we have on the field; we should be more diverse this year because of the incredible depth that we have.”

Last season, F-M’s offense was heavily reliant on running back Eric Coley. Coley rushed for 1295 yards in six games in 2016 and hid some of the depth issues that the Hornets had.

The general added that the Hornets “want to be able to attack both through the air and the ground.” Nevertheless, he stated, “when we are running well, they don’t get to see anything else.”

F-M’s running game is going to mainly revolve around two juniors who were brought up to the varsity team at the end of last season in Mitchell Seabury and Zack Page.

Muench said that, heading into this year, that experience will be “incredibly” valuable to those two and it was planned that way. He said that we should “look for great seasons out of these two fine players.”

And he said that that’s kind of what makes this team unique. He said that there are a number of “young players who have already arrived before the senior year” and then he is also impressed by “the great gains the seniors have made through the offseason work.”

Muench, who is entering his third season of his second stint as the head of F-M’s football program, acknowledged that they expect to achieve their goals despite the tough schedule. He said, “we have the opportunity to be successful every time we take the field. We also know that we are facing difficult challenges because of the strong schedule.”

Despite having to climb mountains, captains Andrew Testani, Tyler Powell, and Tim Shaw have high expectations.

Testani said that “with hard work and dedication, I believe this team can do anything we set our minds to.” The lineman also emphasized the mindset that stays consistent throughout the team and said, “we have a great group of guys this year and everyone is committed to the team. If we keep working hard, I believe we can win a championship.”

Powell’s thoughts elaborated on that. He said, “our expectations for this season are definitely higher than last season. We want to not only be able to compete for the sectional championship, but win sectionals.”

Shaw, who is a linebacker, expects himself and his teammates to give maximum effort on every play. He said, “on the defensive side of the ball, we have the talent to play fast and physical with 11 guys to the ball every play.”

All three captains have a similar mindset when it comes to how to work with the first-year varsity players. Testani is looking to help the new guys adapt to the practice routine, which is run in a “very particular way,” while Powell said, “We (the seniors) can tell they guys that we know what it’s like to be under the lights on a Friday night for the very first time.” Shaw said that his experience will help him build better bonds with the young guys because he’s been in their shoes.

Powell, Testani, and Shaw agreed that it is important for them to represent the team properly off-the-field. Testani and Powell said that they will hold their teammates accountable and make sure that the guys are staying out of trouble. Shaw said that he will “make sure to create an overall positive image for myself and the citizens team off of the field.”

The captains and coaches will begin to try to guide the Hornets to their goals on Sept. 1, when they open their season at Corcoran. 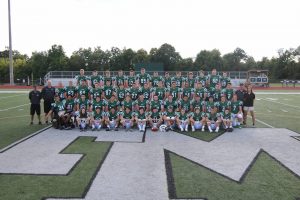 Behind Seabury, F-M Saddles up to beat CBA

Hornets fall to Baldwinsville, get Knocked out of the Playoffs