For the Fayetteville-Manlius varsity football team, there was a constant team mentality that was created by Coach Paul Muench on the first day of practice.

Although the Hornets finished with a record of 4-5, they really were successful when it came to overcoming the hurdles that came out of nowhere throughout the season just by simply sticking together and believing in one another.

When the players surrounded the front of Coach Muench for the last time, there was no talk about what the team didn’t accomplish. Coach Muench and his assistants just told the players how proud they were of them and how much the players grew and became better men because of football.

And their ability to do that and to believe in themselves and the guy next to them was tested on a night where the people they represent were watching them.

As Eric Coley went down against West Genesee on homecoming night, the Hornets stood with their mouths open and just hoped that it was nothing serious. Coley, who was the catalyst for the offense and made his teammates better on the defensive side of the ball, rushed for 1295 yards in the 6 games that he did play in and immediately learned that he had dislocated his finger and eventually underwent the surgery to repair it that ended his season.

But, though it was an uphill battle after that, the Hornets and their coaching staff saw this as an opportunity to work on improving the football program and managed to get some younger guys action and practice at the varsity level.

Coach Muench sprinkled some sophomores into the offense after Coley’s injury. He gave Mitchell Seabury and Zack Page, who both spent the majority of the season with the junior varsity team, the opportunity to make their cases for significant playing time next season.

The young guys ignited the Hornets with their enthusiasm on and off the field as they split the workload and provided a more versatile running game for them. Seabury’s strength and durability allowed Coach Muench to alter the running game and have an inside-out game plan and the speed of Page complimented Seabury’s style and allowed him to pass defenders in the blink of an eye.

Senior quarterback Henry Josephson built a bridge that connected the other players to the coaching staff with his leadership on the field and on the sideline. His positive attitude helped as he trotted up and down the sideline, trying to convince his teammates to support the defense.

Wide receiver Nate Fischi had a few catches that sometimes put points on the board for the Hornets. His effort also really made a difference when he was playing cornerback and guarding opposing receivers and allowed him to be disruptive and even intercept a pass. Fischi’s mentality led to success on both sides of the ball throughout the season.

Starting lineman Drew Guillaume, Joey Anderson, John-Luke Buonfiglio, Andrew Testani, and Chad Ogborn all did a really good job of using their strength to protect Josephson on offense and then attack the opposing quarterback on defense.

Linebacker Tim Shaw also did a great job of doing what the coaches asked of him. The sophomore constantly filling the gaps in the middle of the field and followed the defensive gameplan that was constructed by assistant coach Dan Conley.

The 4-5 record doesn’t match the culture that belonged to F-M’s varsity football team. It didn’t matter if you played every snap or just rode along the sideline between snaps, you were a part of the team. 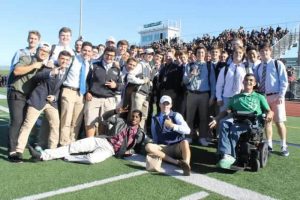