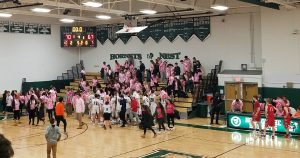 Flashback … It was reminiscent of last year’s game when F-M hosted Baldwinsville. The weather was miserable, it was Pink-Out, and it ended in the same fashion, just the other way around. F-M had the lead going into the final possession and Baldwinsville rushed down the floor and hit the game-winner as time expired, but this time around, Alex Bychkov and the Hornets had ice in their veins.

With his team trailing 67-65, Hornet senior Alex Bychkov put the gymnasium on his back and found a way to get a decent look from beyond the arc and sparked the fuse that led to the 70-67 win over Baldwinsville in the contest that was supposed to take place on Feb. 2, but was postponed because of weather conditions.

He ran up to the arc right in front of the home teams bench, received a pass from Khai Pugh, and who was driving to the rim, and drilled the three-pointer to take the 68-67 lead with 1.6 seconds left.

The crowd was engaged the whole time and its cheers and enthusiasm echoed throughout the gym. Before the game, Hornet players gave out their warm-ups to those in the front row of the student section and had them wear the shirts backwards, which amped up the emotions of the game even more.

The entire Hornets’ Nest was ready to give its team a boost the whole time. It was a full house and the student section overflowed, pushing some of the underclassmen to the seating across the way, which made it actually feel like a home game.

Some of the previous home games for the Hornets didn’t have the feel that home games typically have. The student section made sure that it did what it could to create the same environment as it did when it followed the team to Jamesville-DeWitt earlier this year.

Without a doubt, this one felt like a home game, especially when things weren’t going right or looking good for the Hornets. The crowd persistently created energy, especially in the second half, when the Hornets found themselves in foul trouble.

Their two big guys, Cade Collum and Charlie Gadsden, both had four fouls by the end of the third quarter. Having to sit the 6’7 Collum after he picked up his fourth right out of the gate in the second half took away the biggest advantage the Hornets had and forced head coach Jason Dudzinski to rely on the inexperienced Gadsden, who made a few mistakes that you would expect him to make, given that he is a sophomore playing at the varsity level.

As soon as Collum was taken out, rebounding became an issue for F-M. The Hornets began to surrender offensive rebounds, forcing Dudzinski to put Collum back in and hope that he doesn’t get called for his fifth foul.

Collum’s teammates took care of things on the offensive end. Four of them reached double-figures in scoring, as Pugh had 20 points, both Bychkov and Brad Procita recorded 12, and Tyler Schneider had 10.

F-M Falls to Proctor, but Shows Heart Capable of Carrying it to Success