Gymnasiums have been Jason Dudzinski’s second home throughout his 20-year career as a basketball coach.

Dudzinski, who was named the head coach of Fayetteville-Manlius following Tom Blackford’s departure, has no prior experience as the head of a high school basketball program.

The 45-year-old is looking to create a basketball program that resembles the one that Coach Mike Krzyzewski has created at Duke University, as he admires how Coach K emphasizes defense and unselfishness.

As the hall of famer does, Dudzinski said that he is looking to establish “a sense of togetherness (and) a winning atmosphere” and wants his “players to have fun a 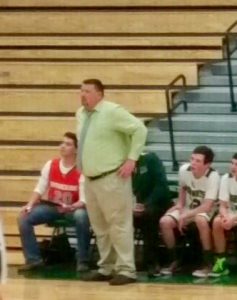 nd love playing at F-M.” The first-year head coach also stated that he expects his team “to be the toughest team around.”

Toughness was also on his mind when he was asked what he hopes to teach his players throughout this season and the seasons to come. He wants his players to learn that you can have fun while being competitive and that “anything is possible” when you play basketball.

As he is teaching his players that, Dudzinski wants to build a great relationship with them. He said that “on the court I’m all business, but off the court I love to goof with them and talk about their lives to see what interests them.”

He expects himself to tread lightly when it comes to possible outside influences and said that wants to deal with the expectations “one day at a time” because his “players are high school kids (and) they are distracted by everything, especially social media.”

Knowing how pressuring that outside expectations can be sometimes, Dudzinski hopes that they will pull players together instead of push the team apart. In the end, he said that he hopes that his “players become long-time friends” and enjoy playing for him.

But he knows that he has to work on some things as a coach and plans on improving little by little. He compared a coach’s situation to a player’s and said that “if you take it easy, people will pass you by.” The basketball coach said that the thought that there are coaches who are better than him keeps him “humble and focused at all times.”

Dudzinski went on to say that success and winning aren’t always tied together. He said that he has “had teams that won 90% of their games” but he said that he didn’t think those teams were very successful either because the “kids didn’t like each other” or because they “didn’t play as a team.”

Even though he emphasizes the idea of a team atmosphere to his players, he said that he likes to push young players “past their comfort levels”, because, ”once they see that they can be tough situation and work hard, anything can happen.”

But, he always finds a way to embrace the experience of being a coach. When he gives out advice to first-year coaches, he tells them to “have fun, teach the game, enjoy your time with the kids, and work as hard as you can.”

Now that this is his basketball program, he expects a lot of it and the people who are involved in it. He said “I want to win league, sectional, regional, and state championships”, but, his goals will not get accomplished if the players don’t have the same ones.

The most important long-term goal of his is that he wants his players to build a reputation and make people say that “the Hornets are tough.”

When it comes to his free time, Dudzinski really loves spending time with his family whenever he has the opportunity to.

The family man is looking to guide the basketball program at Fayetteville-Manlius in the right direction and help the players who are part of it improve, both as players and as people.